Enter your number to get our free mobile app

Mmmmmm, cheese.... Who doesn't love cheese? If you're lactose intolerant then that doesn't count. It's hard not to love cheese. Pepper jack, Gouda, Brie, Bleu, Colby, Swiss, Parmesan, and so much more delicious flavors of cheese go great with just about anything, or they are just good by themselves.

While it's easy to love all kinds of cheeses, what is each state's favorite cheese? We have the answer to that question.

To find out each state's favorite type of cheese, we turn to our friends at Zippia. Zippia used Google Trends and examined just under 20 popular kinds of cheese. They even included some "cheeses" that some people wouldn't consider an actual cheese. You know, Cheez Whiz, Velveeta, etc.

From there, Zippia determined what cheese is searched disproportionately, a high amount, in each state. Zippia said "in the event of two (or more) kinds of cheese tying for a state, the cheese with the highest search volume was chosen."

Before I reveal Iowa's and Illinois' favorite cheese, here are some key facts that Zippia found in their search.

Here is the map showing each state's favorite type of cheese. 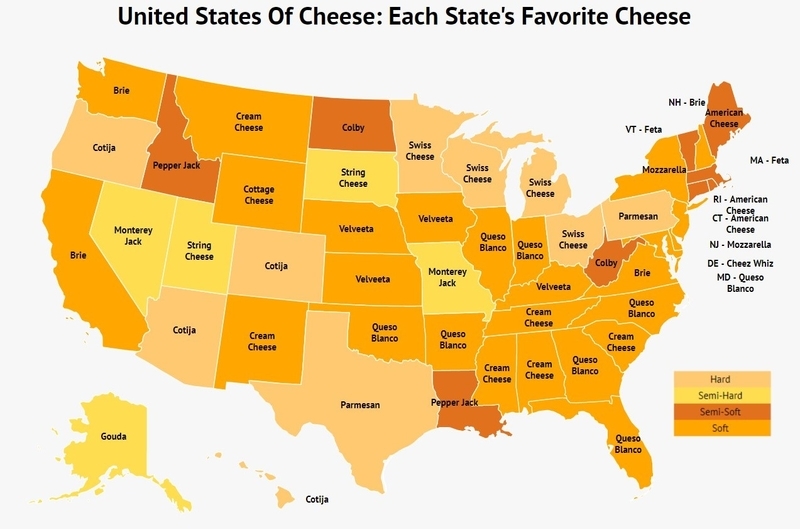 Zippia found that Illinois' favorite type of cheese is Queso Blanco, which is also the favorite of 7 other states.

Iowans apparently like very, very processed "cheese". Velveeta is Iowa's favorite type of cheese, which is also the favorite of two other states in Nebraska and Kansas.

Top Comfort Foods Of The Pandemic